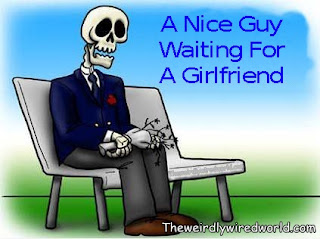 I watched MTV's Friendzone for the first time yesterday and it got me to thinking... For those of you who haven't watched the show here's a brief synopsis. Here we have a set of best friends who enjoy each others company and get along fabulously. Usually it's a girl and a guy. One of these individuals has a secret crush on the other. For example if it's the guy who has a crush on his best girl-friend he must muster up the courage to tell her and ask her on a date at which point she answers Yes or No.


In one particular episode there was a sweet, stocky young man who was madly in love with his best friend. At first glance I could tell that she wouldn't be interested in him, the proverbial "nice guy". Because, isn't that the way it works? Throughout our lives we have nice guys or girls who would relish in the opportunity to love & adore us. Yet somehow that person doesn't fit the mold. We're not physically attracted to them, he/she is a bit too nerdy or chunky...the list goes on. I've been blessed with the opportunity to date some REALLY good guys. Each of whom would have made great husbands. But with most of them that "it" factor was missing. You know that thing that makes your heart skip a beat... Yeah, that nonsense.

Anyway, as I watched that young lady turn down her sweet and stocky friend I screamed at the screen (with disgust of course) "Don't do it girl! In about 10 years after having your heart ripped apart by jerks you're gonna wish you'd given that "nice guy" a chance." But it was to no avail, the show had been previously recorded and television is not yet interactive so she couldn't hear me, SMH.  While my disgust grew I realized it wasn't her that it was directed at, it was my younger self. If I just would've stayed with so and so I would be married by now. If I could've loved him back or been physically attracted to that other good guy perhaps I wouldn't be single.

*Sigh* Why is it that we love & pursue those who are indifferent to us and run from those who love & adore us? Is it the challenge? Is it low self worth? Is it that we're idiots? I don't know. What I do know is that nice guys will no longer finish last with me. They are my top choice and have been for some time now.

Rest Assured, Your Love Is Closer Than You Think!
To continue the discussion join the Not-so-Patiently Waiting...
Facebook Page at  https://www.facebook.com/groups/206747639372967/
& Follow me on Twitter at https://twitter.com/DayDream217

Attraction is a must and if it's not there then its a wrap for me. Some feel it can grow and come later I totally disagree with that. Now just because there is attraction/chemistry does NOT mean that if he isn't worth .02 I would keep him around but it get him in the door for the interview.

Finding/meeting somebody who you are attracted to and who is also attracted to you, compatible, single and emotionally available all at once is designed by God :-) and so far my time has not come just yet.